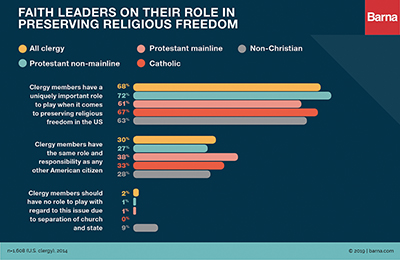 We are only a few months into 2019 and it has already been a newsworthy year full of major headlines. With all of the dramatic changes and strong stances taking place in the current American social and political climate, pastors are feeling the effects of trying to lead God’s flock in a divided culture.

In an article sharing some results of a new multi-year study by Barna, researchers examined how pastors are coming to terms with the expectations surrounding them in this divisive environment — expectations from themselves, their congregations, and the world outside the church.

Titled “Faith Leadership in a Divided Culture,” the full report is “the culmination of four years of research examining clergy members’ views on matters of religious liberty in the United States,” according to the Barna website.

The main takeaway from the research sample — titled “Pastors Face Communication Challenges in a Divided Culture” — is that a large majority of Christian leaders agree that discipling Christians around social issues is a critical responsibility for pastors. However, there is less widespread agreement on what exactly this means and how pastors should go about achieving this.

Here are some more details:

In a survey to Christian pastors, Barna had respondents answer whether each action in a list presented to them were part of their role.

In addition to pastors’ own attitudes on the current social and political climate, researchers also surveyed them about their reactions to the attitudes of their church members. The Barna team found that there were topics about which clergy said they felt limited to speak or pressure to speak. Interestingly, the topics were largely the same for both categories.

• Half of the respondents said they frequently (11 percent) or occasionally (39 percent) feel limited in their ability to speak out on moral and social issues because people will take offense.

• Two in five pastors said they occasionally (34 percent) or frequently (6 percent) feel pressured to speak out on topics they aren’t comfortable discussing.

• More than two-thirds of the respondents said these limitations and pressures come from people inside their church.

Roxanne Stone, Barna’s editor in chief, said in the article that this research shows the reckoning the Christian community had had to have with what laws are “those of the land” and which are specific to its religious context. She said it’s necessary for pastors to be sure of which issues are a universal good for human flourishing and which involve spiritual transformation or church community.

“The pressure for leaders and especially faith leaders to satisfy everyone on all sides, and to avoid offense, is very real today, especially in the digital era,” Stone said. “As the research reveals, the issues pastors feel most pressured to speak out on are the same ones they feel limited to talk about. In other words, the squeeze comes from all sides: those demanding that the church take a stand and those outraged when it does.”

For more information on pastors’ current social views and other aspects of this study, visit https://www.barna.com/research/pastors-speaking-out/.

Every year, Outreach Magazine, a Christian publication dedicated to the outreach and evangelism of the church, releases the Outreach 100 report: a list of the year’s 100 fastest-growing churches in the United States.

“The Outreach 100 is a collaboration between Outreach Magazine and LifeWay Research,” according to the Outreach website. “It’s our attempt to identify and learn from the country’s fastest-growing churches. The LifeWay Research team surveys churches, verifies the numbers, calculates the results and compiles the lists. The Outreach editorial team conducts interviews with many of the pastors and reports on those conversations, profiling churches and compiling features on the churches and their leadership.”

Readers are required to subscribe to the magazine for a copy of the full report, but a complete list of the churches with key details can be viewed for free on the Outreach website at https://outreachmagazine.com/outreach-100-list.html.

An organization that advocates for clear communication of policies by churches across the country — particularly on controversial social topics like LGBTQ clergy and female preachers — conducted and released its own study in response to the Outreach 100 report: “Scoring America’s 100 Largest Churches for Clarity (2018).”

The study by Church Clarity revealed which churches of the Outreach 100 list have clear policies regarding the issue of women in positions of leadership in their church. Each of the 100 churches received one of five scores:

There is a sixth score on Church Clarity’s scale, “Verified Clear.” For a church to receive a “VC” score, a representative from the church must respond to a policy survey sent by Church Clarity to every church the organization scores. The survey gives the church an opportunity to confirm its actively enforced policies directly with the Church Clarity team.

A “VC” church would not include the status of egalitarian or non-egalitarian because the survey answers are displayed for interested readers on the Church Clarity website.

None of the churches on the Outreach 100 list chose to respond to Church Clarity’s survey, according to the website, so the “VC” score is not included for the range listed above. For more information on the definitions of these scores, visit https://www.churchclarity.org/score-definitions#women.

It should be noted that Church Clarity is not rating the policies, just the church’s transparency about communicating those policies to the public. This is why “Clear: Non-Egalitarian” is a “higher” score than “Unclear: Egalitarian.”

Here are the findings of the report:

Church Clarity notes on its website that an “Undisclosed” score does not mean a church doesn’t have a policy regarding women in leadership (“they probably do”); it means the evidence of where it should fall on Church Clarity’s scale is inconclusive and not clearly communicated by the church itself.

STUDY SHOWS MILLENNIAL CHRISTIANS ARE MOVING AWAY FROM EVANGELISM

Whether or not a church chooses to communicate its views in the current social and political climate, there is no escaping the effects that the changes in today’s society are having on the members of the church — and their willingness to communicate their views.

In January, Barna released a new study called “Reviving Evangelism” that was commissioned by Alpha USA, an organization dedicated to holding sessions to educate and encourage people to explore the Christian faith. Barna researchers took a closer look at the current cultural climate and people’s responses to it to identify what exactly the aforementioned effects are on practicing Christians.

In an article sharing a sample of the research, Barna revealed one of the major findings of the new report: almost half of practicing Christian Millennials surveyed for the report said they believe evangelism is wrong.

According to Barna, there are several things contributing to a decrease in younger Christians’ willingness to evangelize, which is described as the act of sharing one’s faith and “spreading the good news.”

“Today, a number of factors are curbing many Christians’ enthusiasm for faith-sharing, including the decline of religion in America, a spreading apathy toward spiritual matters and a growing cultural suspicion of people of faith,” according to Barna’s website.

Interestingly, Millennial respondents in the survey given to practicing Christians felt the strongest about confidence in their ability to communicate their faith; more than 4 in 5 agreed that they know how to respond when someone raises questions about faith and about three quarters (73 percent) agreed that they are gifted at sharing their faith with other people.

Yet, nearly half (47 percent) of the same respondents agreed with the following statement regarding evangelism: “It is wrong to share one’s personal beliefs with someone of a different faith in hopes that they will one day share the same faith.”

The data show that this is higher than any other generational group surveyed for this research with 20 percent agreement from Gen X respondents, 19 percent from Boomers, and 20 percent from Elders, defined as people born before 1946 (age 73 or older).

Further data support the conclusion that this tendency is because younger Christians “are generally more personally aware of the cultural temperature around spiritual conversations” than their generational predecessors, according to the article. Among practicing Christians, Millennials reported having an average (media) of four close friends or family members who practice a faith other than Christianity, while Boomers, on average, only reported having one. The authors noted that a cultural resistance to “conversations that highlight people’s differences” makes sharing the gospel today harder than at any time in recent memory.

“Society today also casts a negative light on proselytization that many older Christians do not fully appreciate,” the authors continued. “As Barna found in research published in Spiritual Conversations in the Digital Age, [a previous report released in April 2018 using different data], 3 out of 5 Christian Millennials believe that people today are more likely than in the past to take offense if they share their faith (65 percent) — that’s far higher than among Boomer Christians (28 percent). Millennials are also either two (Gen X) or three times more likely (Boomers and Elders) than any other generational group to believe that disagreement means judgment.”

In February, Barna released a second article sharing some of the data collected from the survey of lapsed Christians and non-Christians. Here are some of the most interesting findings:

Nearly all lapsed Christian and non-Christian respondents said they have a friend or family member who practices and prioritizes Christianity.

“The data paint a striking picture of disconnection between Christian ideals of what it means to share faith effectively and the experience of non-Christians — and between non-Christians’ expectations of Christians and Christians’ perceptions of themselves,” according to Barna’s website.

When asked for the most desired traits in a “good faith conversation partner,” both practicing Christians and lapsed/non-Christians agreed that listening without judgment, being confident in sharing their own perspective and exhibiting a vibrant faith of their own are important traits to have, though the level of importance each trait has differed between the two groups.