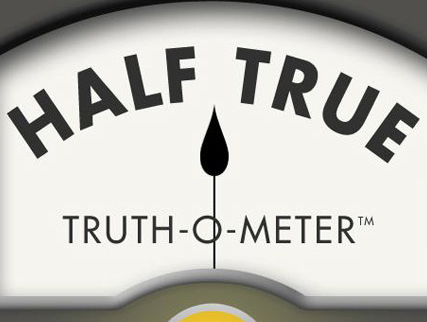 It seems we’ve all grown too accustomed to settling for being told ‘half-truths’ obviously designed to deceive. Politicians are likely at the top of the list of half-truth-tellers — but half-truths are also featured regularly on our nightlight news, radio ads, commercials, the Internet, and even many companies’ sales reports.

The problem with any half-truth is it’s actually a whole lie.

Telling lies makes you a deceiver and a liar.

Lying is a character flaw that, in the past, would mark you as being untrustworthy. Unfortunately, lying has become such an acceptable art form that we actually repeat these half-truths and admire people that can use words in such a way that they appear to be saying one thing while hiding the actual truth. The use of ambiguous language that conceals the actual truth should be a character flaw, not an admired trait.

Another problem with half-truths is that they contain enough truth that they can misrepresent fact and are meant to deceive. Deception has become so common that we actually re-elect, befriend and even admire those who deceive so often they could be considered compulsive liars.

Fortunately, studies have shown that companies that are known for integrity, transparency and trustworthiness actually do better than their peers. Likewise, couples who are honest with each other tend to stay together, remain married and have fewer financial problems than their half-truth-telling counterparts.

Regardless of how common deception and half-truths are in society, integrity is likely the single most important character trait you could ever embrace. Integrity is soul-deep and provides the moral compass that actually ensures long-term success and happiness in life.

Integrity is a catalyst for other important virtues, as well; kindness, generosity, courage, responsiveness, and even good work habits are locked in by the embrace of honesty and integrity.

Embrace integrity. It’s a wonderful way to differentiate your business and your relationships with your friends and co-workers. When you’re known for your integrity, it becomes more and more difficult for others to convince you that their half-truths aren’t actually whole lies.