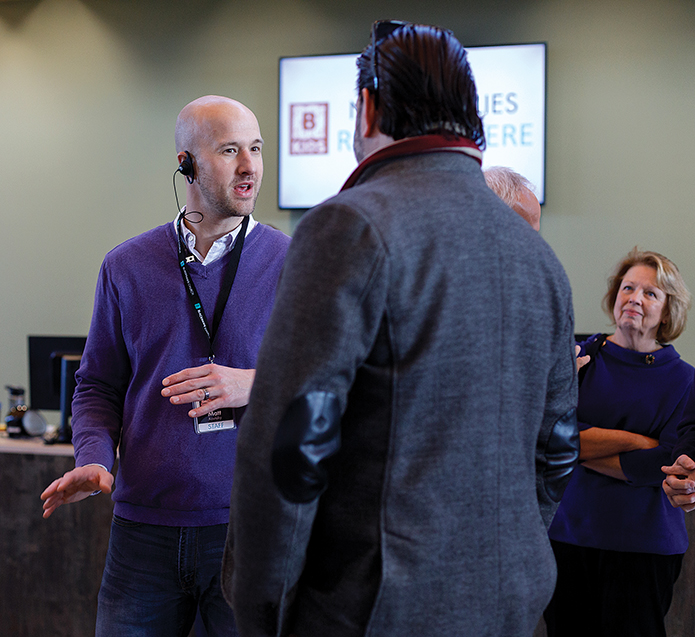 Spanning more than 130,000 square feet, Blackhawk Church transitioned from a (scraps of) paper-based facilities management system to an intuitive platform — all with zero downtime.

The platform’s implementation has even fostered the pursuit of a guiding principle for the church: providing a peaceful place of worship.

In 2007, Matt Kautzky and his wife, Corey, were looking for a church to call home in the Madison, Wisconsin area. They visited Blackhawk Church for the first time as it hosted its final service in its Madison campus. The following Sunday, the church would open the doors to its new facility in the nearby suburb of Middleton.

Though it was unusual timing, the Kautzkys knew they’d found what they were looking for. “It just felt different to us,” Matt recalled. They followed the Middleton move and immediately got plugged in, serving on the church’s welcome team.

While Matt’s spiritual house was now in order, he said his professional life was lacking. He was growing disillusioned with a successful, but demanding, real estate management and development career.

So, when an operations management position opened up at the church, he and Corey discussed it. Her concerns were the same as many church employees who come from the for-profit world: What about how hard you’ve worked for your career? What about funding?

“But I had an exceptionally bad day one day, and I applied,” Matt recalled. Having confided in Corey about the opportunity and after prayerful consideration, he was soon managing the day-to-day setup of Blackhawk Church’s facilities — primarily, making sure the buildings were clean and ensuring space and assets were allocated properly, whether it was for a small meeting or a large-scale conference.

Matt’s biggest initial challenge wasn’t learning how “things are done,” facilities-wise at Blackhawk Church. Rather, he aimed to improve those processes at a 130,000-square-foot church with complex mechanical systems. 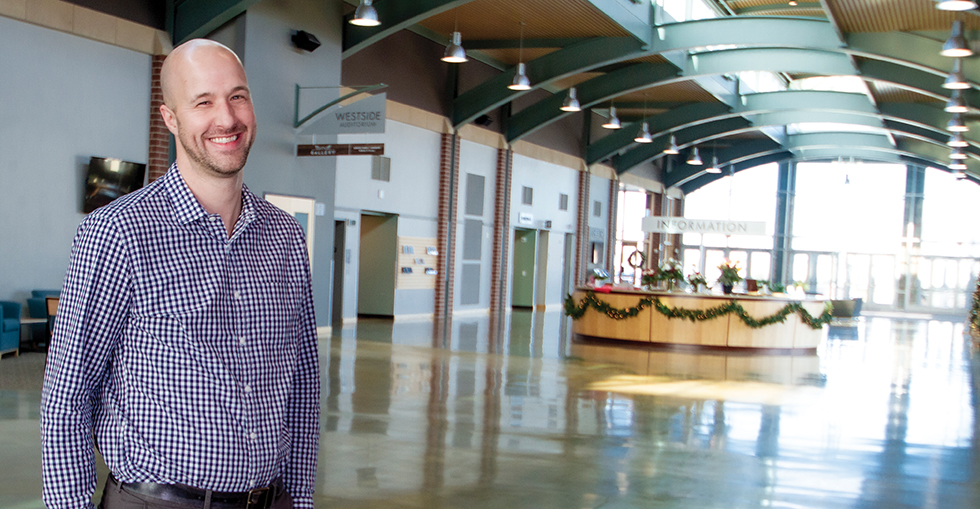 It was a far cry from the smaller churches Matt grew up attending.

“The mentality that surrounds a small church is lovely, and I loved being a part of it,” he said. “But when a church grows to this point, there’s a fork in the road. You have to decide how you want to plan, budget and manage these buildings that can be beasts, and who’s going to be along for that ride.”

“Quite frankly, I think it’s very hard for a lot of nonprofits to make the transition to owning real estate and assets, and understanding what all that means,” he added.

Fortunately, given his real estate and development background — plus, years of firsthand experience with the church’s previous facilities manager — Matt was in the ideal position to step up Blackhawk’s facilities management game.

The first pain point Matt aimed to eliminate was the church’s paper-based facilities maintenance system — literally. Small scraps of paper with maintenance requests were collected on Sunday, sorted by the information desk volunteers, and put in the appropriate staff mailboxes. There was no way to know who wrote the notes, and the scraps of paper could (and did) easily go missing.

Even if they didn’t disappear, they weren’t always specific. “It might say, ‘Door doesn’t work in X area,” Matt said. “And I thought, OK, which door? Northeast? Southwest? What if it’s a whole bank of doors?”

All this translates, of course, to people-hours and the costs associated with them.

“It’s really hard to put a tangible number on it,” he points out. “But even if you take conservative estimates, you’re spending at least half an hour trying to figure out each note. That’s 30 minutes of lost time that you could’ve spent actually solving the problem.”

Everybody loves a good spreadsheet — but it’s simply not the best solution for facilities management at a large church.

When Matt took on the facilities director role, an Excel spreadsheet held 70 to 80 different maintenance to-do items. Staff members could add to it, but rarely did — except for maintenance staff. And even they rarely attached their names to the notes they left in the spreadsheet. Adding to the complexity, when an item was resolved, it was deleted.

“We had no way to answer some key questions: How was that resolved? What did we do? Did we budget anything for that? Where did we spend from?” Matt explained. “Then, you’re cross-referencing an accounting platform and previous emails and so on, which make it quite challenging.” 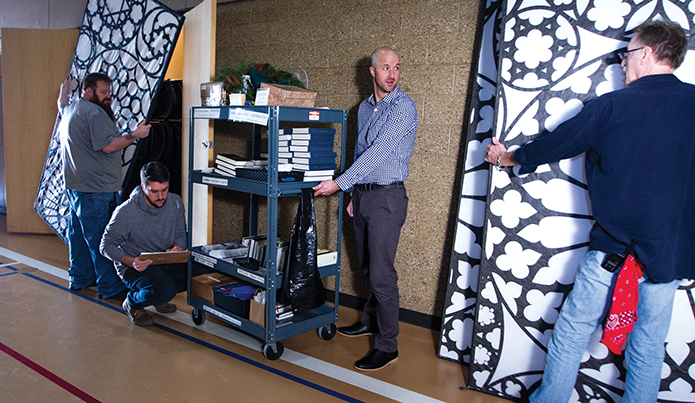 Matt knew the church needed a better facilities management system. To find it, he first reached out to some former colleagues who managed facilities at the state Capitol. He also asked good friends who managed the YMCA. “They’ve got a lot of equipment, and they run tight on their budget,” he explained.

He took their recommendations and did online demos of each — about three systems in all. One of his key criteria was an open, highly customizable platform.

AkitaBox, a building infrastructure data platform, was particularly well suited to how Matt wanted to run facilities at Blackhawk Church: “It provided an opportunity for me to go beyond a traditional facilities management standpoint of, ‘This is broken; it’s in this room; it’s this ID or this QR code,’” he said.

Once the decision was made, implementing AkitaBox only took 90 days — about half as long as Matt expected. “When I came to them, I said, ‘We’ve got time. Let’s do this right,’” he recalled. “They told me, ‘Oh, we’ll do it right — but it won’t take that long.’”

A big part of getting implementation correct from the get-go was categorizing and cataloging all the QR codes on the large church campus. To identify them, Matt credits his AkitaBox Customer Success Manager, Lucas Carr, for asking the right questions. “It was clear he wasn’t reading off a script,” Matt added. “He knew what he was doing.”

Matt continued to collect the scraps of paper with maintenance requests on them. He went out of his way to ensure that he not only understood them, but that they were represented in the new system.

Having spent five years on staff at Blackhawk at that point, Matt said there were quite a few “constant” maintenance items to incorporate. “We’ve got a lot of great volunteer leaders and staff members who tinker with things like water fountains, refrigerators, light fixtures, and so on,” he said. “And I’m thinking, This is about the fourth time somebody has tinkered with that item. If someone has touched something five times, and the problem still isn’t solved, then maybe it’s time to call a contractor. I want to know those things.”

With work order histories stored in the AkitaBox software, these kinds of insights can easily be illuminated across their entire campus.

Between Matt’s and Lucas’s efforts, every maintenance item on campus was added to the AkitaBox system — from fire annunciators to floor drains, sinks to stoves, even refrigerators and microwaves. Even individual toilets (62 in all) have their own codes.

A large number of floor drains were another perpetual maintenance problem for Matt and his team.

Some of them are particularly prone to drying out, creating an expensive repair. Matt knew where every drain is located, including the most problematic ones; however, the built construction documents didn’t accurately reflect this information. He wanted to create a specific recurring work order that would have his team members routinely pour water down these drains. Matt and Lucas did a walk-through, and each drain was plotted as a pin drop in AkitaBox’s Floor Plan Viewer.

“Now, when I open up the system, I can just say, ‘Give me plumbing; give me drains,’ and boom! All of them are there,” Matt said. “I create a work order off of that, and now my maintenance staff never misses one.”

With a paper-based system, of course, there used to be no good way of tracking this information. “Did they get all the drains? Do I have any way of checking that? Do they even know where all the drains are?” Matt asked. “I can’t assume that’s always the case. The AkitaBox software has alleviated this concern.”

Importantly, Blackhawk Church was also able to incorporate every piece of audio / video / lighting equipment into AkitaBox. For example, Matt worked with AV and tech personnel to know where every projector is located and when its bulb was last changed.

He’s even able to track maintenance on guitars, soundboards, and much more.

“When you think about church, there’s a lot of theatrical production that goes into it,” Matt pointed out. “Our end goal is a system that’s not just facilities-based, but also lets us work alongside our worship teams.”

The AkitaBox software platform uses color-coded asset pins placed on a building’s digital floor plan. Matt said that this feature has allowed his team to easily identify asset types and locations without disrupting workflow in the worship facility.

“For example, my team members can see the pin dropped exactly where a variable air volume box is,” he explained. “They aren’t searching in three or four rooms and hallways, disturbing a pastor, disturbing a meeting and so on, just to find it.”

All this data input and customization represented a slight price increase on the front end of system implementation. However, Matt said he’d do it all over again — and he urges other facilities managers to do the same.

“Facilities managers have a tendency of saying, ‘I’m going to carve out an hour or two to add more [QR codes] to the system. I’ll get to it.’ And I’m guilty of that, as well,” he explained. “But it’s hard. We just opened a new 42,000-square-foot building (which also implemented AkitaBox); there’s always something else that needs to be done first.”

As another benefit of front-loading all this data, Blackhawk Church experienced zero downtime during implementation. Matt said this is partly due to spending a few months fine-tuning and familiarizing himself with the AkitaBox system before releasing it to the entire staff. Now, staff members can input their data via a portal, or even on their cellphones. And if they have questions, Matt feels confident to answer them.

Matt said that with a more predictive (versus reactive) approach to facilities management and maintenance comes a welcome byproduct: cost savings.

At Blackhawk Church, the ability to prevent sprinkler system leaks and frozen pipes has been particularly beneficial. “They used to freeze about three times per year during the winter, and it was $10,000 to $15,000 to fix each time,” Matt explained. “So, we’re able to establish a predictive maintenance program in conjunction with lowering budget impact.”

In relation to budgeting, the accounting team also appreciates the ability to assign a price-per-square-foot metric to campus spaces. This is especially helpful when it comes to utility bills; now, the accounting staff won’t just notice if the bill goes up — they can decipher the factors behind that increase.

Ultimately, this new mindset regarding facilities management and maintenance has enabled Matt and his team to get its reactive-to-preventative ratio down to almost 1:1. This means that facilities aren’t hindering ministry in any way.

“Our maintenance people are happier,” Matt added. “They can plan their days better. They can even start to focus on predictive maintenance.”

Finally, Matt and his team are better able to support a guiding principle for the church: providing a peaceful place of worship.

“It’s not that there are never any challenges; it’s just that there aren’t recurring challenges — a door that won’t lock, or a cleaning procedure that’s routinely overlooked,” Matt explained. “It’s the little stuff that makes a big difference.”