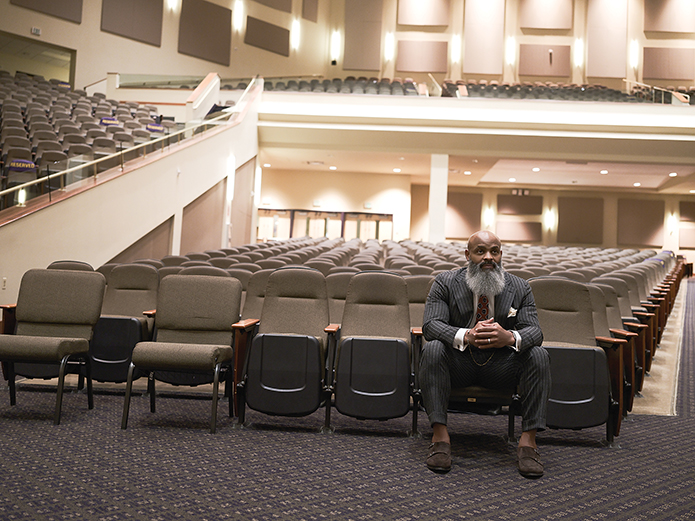 Backed by a team with financial finesse — plus, a church-centric banking partner — Odell Dickerson, Jr., and New Psalmist are enjoying streamlined processes, savings

Maybe you were familiar with Odell Dickerson Jr., before you saw him on our cover.

As one of the country’s most sought-after consultants and keynote speakers in leadership, faith-based management, and motivation, his face is a familiar one for many church executives.

Additionally, as COO at New Psalmist Baptist Church in Baltimore, Odell has in-the-trenches experience they can relate to.

Yet, while Odell Dickerson, Jr., holds a bachelor’s degree in business administration and accounting and an MBA, he acknowledges that — unfortunately — business acumen isn’t always a high priority for churches. Indeed, his title (COO) is still a rarity, even in large congregations. Yet, this expertise is what enables him to effectively interpret, execute and lead the ongoing transformation of New Psalmist’s vision. To do, as he calls it, “Kingdom business.”

“It stresses how important it is to have integrity, systems and processes on the ‘business’ side of the church,” he points out. “Not only does that make people feel comfortable, but there’s a lot at stake if you don’t do these things right.”

Odell was working in the secular business world, when, more than 20 years ago, long-time New Psalmist pastor Bishop Walter S. Thomas, Sr., pulled him aside after a Bible study. He told Odell: “I want to get to know you.”

Within a year, he was on staff — first in executive support positions and, ultimately, as COO.

“I give a lot of credit to my pastor, because he also has an economics degree,” Odell points out. “He understood the need for this expertise in a church that some pastors might not.”

Even so, Odell says he had “never in his wildest dreams” thought of working for a church. When it came down to it, what inspired him to make the leap was a common denominator in all his previous professional, government and corporate roles: people.

“I literally had a conversation with God at some point, just like, God, why did you bring me to the church?” he recalls. “God said to me: All those things, all those different people you worked with, they all come to church. I needed to prepare you to communicate with them.”

Since then, New Psalmist has moved locations several times to accommodate its expanding presence.

In 2010, the church built a brand-new, 4,000-seat worship facility in Baltimore. To fund the project, Odell and his team were considering two different lenders: one was secular; the other was Bank of the West’s Religious Institution Banking division. Though it was a close decision, New Psalmist had a long history with the secular bank and decided to move forward with that lender.

“It takes money to do ministry. It’s Kingdom business. It’s not just business, though; it’s personal, too. We just have to operate with a higher Emotional Intelligence (IE).” — Odell Dickerson, Jr.

Recently, just before COVID hit, financing was again front-and-center before the church began a new, 8,500-square-foot Connection Center on its campus. It would be a crucial, more intimate building to support the church’s vision of being a place for connection, especially given the massive 175,000-square-foot footprint of the main facility.

“We were advised by our attorney and accountants to finance the project by adding it to the deal we already had in place and conserving the church’s cash,” Odell recalls.

“We had a great relationship with our former bank,” Odell emphasizes. “But when we reached out about this, the new terms of our loan just weren’t acceptable for us.”

Fortunately, he and his team had time to recalibrate: “We didn’t wait for the tree to come smashing down on our house. That’s doing business. Good business.”

They also had a great prospect already on the radar in Bank of the West. Odell had maintained a relationship with Randy Marsh, Vice President — Religious Institution Banking, even though the bank didn’t get New Psalmist’s business the first time around.

“At some point, they said to us, ‘Hey, we still want to work with you,’” Odell recalls. “We had an amazing discussion, and here we are — partners.”

“Amazing” is a pretty big word but fitting for this relationship by all accounts.

Ultimately, Odell and his team appreciate that Bank of the West not only offers competitive rates and terms, but also state-of-the-art banking systems and, perhaps most importantly, demonstrates a long history of commitment to church and religious institution financing.

As part of this commitment, Odell says, the church especially enjoys the absence of restrictive covenants and personal guarantees that were part of the previous loan. Previously, New Psalmist had certain covenants and ratios it needed to meet — working ratios, operational cash flow workflows, and so on. The prior bank checked on these, and the church stood to be penalized if it didn’t meet those ratios.

Though Odell says the church consistently met those ratios without issue, the tone this precedent set was the real issue.

“When you’re talking with secular banks about big loans, you have to talk business,” he concedes. “But working with Bank of the West, it was a relief not to have those same ratios in place; they apply unnecessary pressure, especially if you’re covering them. And it’s not like you don’t know you could mess up, but it’s always before you. Don’t you slip. Don’t you fall.”

The fact that Marsh and the bank understand how Kingdom business is done was another big relief for Odell and his team — especially after the onset of coronavirus prompted many secular banks to regard lending to churches as something of a gamble.

In contrast, Odell cites Bank of the West’s Christian focus — and Marsh’s own background as a pastor — as major points of favor: “They understand how faith works, even on the business side of the church.”

Beyond refinancing, it’s worth noting that Odell and his team also take advantage of Bank of the West’s full suite of state-of-the-art banking systems, even though New Psalmist is an East Coast church doing business — daily — with a West Coast bank.

Working with a bank that doesn’t even have a local branch is worth it for a few key reasons: namely, online banking systems that streamline and automate some of the finance team’s internal processes, as well as the flexibility and rewards offered by Bank of the West’s credit card solution.

Odell’s pursuit of a paperless system began when he built the church’s finance department years ago. “We couldn’t be who we are without my whole team, and I couldn’t be who I am without them and my family,” he says.

The church now does all its banking with Bank of the West, thanks to the seamless integration of New Psalmist’s finance system, including its accounting platform, with the bank’s electronic offerings.

Additionally, by switching out all staff credit cards to Bank of the West credit cards, the church is able to eliminate some merchant fees and enjoy returns on certain purchases.

Moreover, New Psalmist is receiving at (or above-average) returns on deposits, even in a low-rate environment.

“From an economies-of-scale perspective, it just makes sense to deal with one bank,” Odell says. “It’s like the old saying goes: a penny saved is a penny earned.”

It still comes down to people, though

Ask Odell Dickerson, Jr., about his passions, and people will always be at the top of the list. It seems the same is true of New Psalmist’s banking partner.

Case in point: in the beginning of the refinancing process for the church, there was a lot of back-and-forth and trading of time-sensitive to-dos. Again, Odell credits Randy Marsh — this time for being a catalyst from beginning to end and making it all happen successfully.

“We just can’t overstate the importance of relationship,” Odell points out. “I know we’re doing business. I know we’re talking money. But the relationship between people is probably the most important thing here.”

You can follow Odell on Instagram @Odellexec. All photos by Jermaine Gibbs / Out Of The Box Photography.