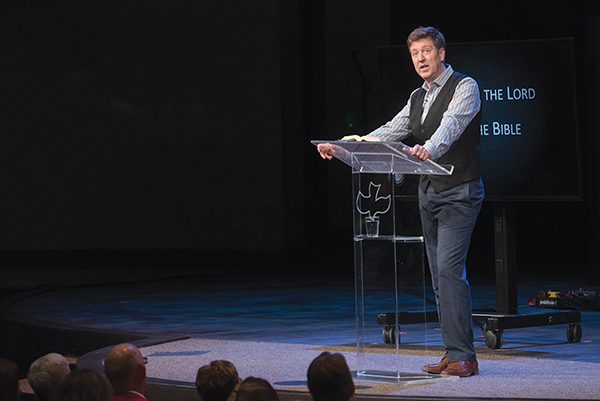 By RaeAnn Slaybaugh
Editor in Chief

By 1996, Cornerstone Chapel had met in a Leesburg, Va., school for several years.

Growth necessitated that Senior Pastor Gary Hamrick and his team look for a permanent church home — either land on which to build on or an existing facility to renovate and call their own.

As it turns out, they found both.

But their path to their new church home — a 108,000-square-foot, ski lodge-style church on the outskirts of Washington, DC — wouldn’t be a straight shot or without plenty of bumps in the road.

“This was obviously a God-manufactured thing, because we came across 32 acres of heavily wooded land under foreclosure in Leesburg,” Hamrick begins. “It was the largest undeveloped tract in town, and we bought it on the courthouse steps for a song.

“It was an amazing thing,” Hamrick adds — especially considering that land in Leesburg (a bedroom community on the outskirts of Washington, DC) was / is particularly difficult to find, let alone afford.

Knowing the challenges, he and his team were nevertheless committed to staying in the area.

“Leesburg is one of those great suburban metropolitan towns,” he says. “The town itself is historic; it dates back to 1757. In fact, the first Methodist church in America was planted in Leesburg, so it has a rich heritage of denominational churches. And it’s just a great community. It has a very hometown feel.”

Church members felt the same. For them, this historic community — and Cornerstone — is a respite from the high-stress environment of their day-to-day lives.

“When you’re on the Beltway commuting back and forth
[to Washington], it’s a pretty stressful life,” Hamrick acknowledges. “That’s the No. 1 thing folks in our area face; people are wound pretty tight.

“Just having a beautiful piece of property we could develop to help put people at ease and unload the stress when they come here — that was a big part of what we wanted to accomplish,” he adds. “To really minister to people, and to allow the peace of the Lord to replace the stress in their lives.”

But first: making it work (for now)

While the land Cornerstone Chapel purchased had huge potential, it also came with some pretty  huge zoning issues. Church leaders began to experience them right away.

Instead of building on the land immediately after purchase, they opted to buy a nearby strip mall and lease a 10,000-square-foot office building across the street, located on 3.5 acres, wanting to renovate both.

“We wanted a building that’s reflective of [ our DNA ] — a little more ‘low church’ versus ‘high church.’ We weren’t looking for steeples and stained glass; our DNA is more casual and relaxed.”

While these facilities accommodated the church’s needs for 18 years, Cornerstone eventually became landlocked. With a municipal airport nearby, it couldn’t “build up.” The church couldn’t expand out, either, without sacrificing the necessary parking. (And that’s with some gracious neighbors, whose office spaces sat empty on the weekends, offering up their parking space for church use.)

At the tipping point, Hamrick and his team were doing four Sunday morning services to accommodate the growing congregation. “But we had to start so early that it wasn’t worthwhile,” he explains. “So, we nixed the really early service and moved it to Saturday night.”

Meanwhile, youth ministry and staff were meeting in the office building across the street. “So, we were kind of having church in two locations,” Hamrick says.

“Between that and the parking challenges, and the multiple services — people coming and going — it started to feel like we weren’t even having church, really.” 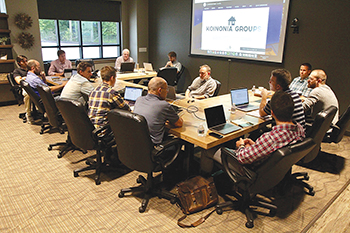 The need for a new home becomes clear

In 2008, despite the zoning challenges they knew they’d face, Cornerstone leaders committed to building a brand-new facility on the beautiful land they’d purchased 12 years earlier. As anticipated, with their increased intention came increased zoning issues — but also a renewed realization of what a blessing this land purchase really was.

For one thing, by that time, the acreage had appreciated by 25 times the purchase price in 1996.

“We couldn’t have afforded to buy that particular tract of property and then build on it, too,” Hamrick points out. “So, it was one of those God stories.”

Second, the property was less than a quarter-mile away from the current facility, meaning members wouldn’t have to make a difficult choice about whether or not to move with the church.

And, of course, it’s simply a beautiful piece of land, with lots of room for future expansion — and built-in serenity.

Leaders announced they were moving forward with the project, and that plans would need to be drawn up. For that step (the first of many), they enlisted Dallas-based firm HH Architects.

Upon recommendations, Hamrick says he knew the firm was a great fit for a large-church project. In fact, as President & CEO Bruce Woody recalls, he and his team had recently completed an 80-acre master plan for a related church and had begun the first phase of a 170,000-square-foot private school, as well.

“Cornerstone saw our ability to aide them in our Strategic Positioning Services and the Master Planning Services to plan for a much larger, permanent facility that would go well beyond what they were being able to do on their existing campus,” Woody says. “Our understanding of ministries and how important they are, and their influence on the ultimate building design solution, were a significant influencing factor.”

This depth of experience was indeed important to Hamrick.

“We hadn’t been down this road before,” he points out. “Remember, we spent the first seven years of our church’s history in a school, and the next 18 years in a renovated strip mall.”

Hamrick credits the HH team for coming to the table with a wealth of information, but not pressuring Cornerstone Chapel to immediately adopt the ideas they presented. “They just said, ‘Here’s some options. Here’s some things we’ve done. Take a look.’”

Although the mayor of Leesburg and town council were onboard with the development of the property, an adjoining land owner objected to it. “Virginia is a commonwealth,” Hamrick explains. “No land developer can develop a piece of property without the consent of adjoining landowners; they have to sign off on your application.”

Even so, the City of Leesburg voted to approve it without the landowner’s consent; in response, he sued the town and the church. “We actually lost at the Circuit Court level because this had never been tested,” Hamrick recalls. “But, all the developers in the Commonwealth of Virginia were on our side. They didn’t want any more to have to get the signatures of adjoining landowners.”

So, the case became a landmark decision when the Virginia Supreme Court voted unanimously to let the project move forward.

“It’s OK, because God’s timing is perfect, and we know that we got in here when we were supposed to,” Hamrick says. “But yeah, the zoning issues were a big factor.”

Through it all, Hamrick says, the team at HH Architects was patient and kept checking in on the progress of the court case.

Woody recalls that time: “We’d go so far, and then we’d have to stop [and recalibrate]. We had to fight for a lot of things, and the zoning battles created a financial and timeline burden for the church. They didn’t know if they should have us proceed with design and documents, but they knew they were continuing to grow on their old site and were running out of options there.”

So, Woody and his team continued to modify and adjust over the years. Eventually, a full master plan was developed and adopted by the City.

“And we had the same [HH] people for the whole project for the entirety,” Hamrick adds. “They stayed with us throughout that entire process.”

Serenity … but not without sacrifice

Now that the vision is a reality, one thing is clear when looking at the newly finished Cornerstone Chapel: a peaceful atmosphere and personal connection are both top-of-mind.

It’s juxtaposition, really: a 108,000-square-foot, ski lodge-style church with ample hospitality spaces, a children’s and youth complex, and an award-winning coffee house, on a heavily wooded piece of land — all within 30 minutes of Washington, DC, one of the busiest cities in America.

These directives are keeping with the church’s DNA. “We’re affiliated with Calvary Chapel, so we’re a bit more casual by nature,” Hamrick says. “We wanted a building that’s reflective of that — a little more ‘low church’ versus ‘high church.’ We weren’t looking for steeples and stained glass; our DNA is more casual and relaxed.”

It was a unique set of design objectives — on a uniquely high-potential, but challenging, piece of land — but the HH team rose to the occasion.

As Woody recalls, the 32-acre site had 80 feet of fall, which required dynamite blasting into the rock to make it usable. “The church literally sits on the hillside, and we carved [ it out ] in the back so there’s a continuation of the hillside,” he says. “The ultimate master plan will crown the ring of the hill, but it still has a lot of grade that comes down to the parking area. This continuation is part of the project’s features.”

Additionally, as he and his team began to develop a master plan, they had to navigate around quite a few archeological digs in the area, since Leesburg is a historic community.

Despite a lot of stops and starts (and recalibrating the project and timeline as commensurate with those), Cornerstone moved into its new home in late 2016. From its position high on a major corner in Leesburg, the church is more visible than it ever was before.

Hamrick says some visitors are wide-eyed at first, given the church’s unique, peaceful architecture and setting. However, the overall effect quickly makes this large church feel smaller, more intimate and friendlier.

As evidence, attendance at many events has more than doubled, and volunteer sign-ups are on the rise.

Meanwhile, the staff — all in the same place, at the same time, for the first time in nearly two decades — is more at ease.

“The explosive growth has been a little challenging, but it’s a good challenge,” Hamrick says.

Overall, he says the feedback has been overwhelmingly positive: “It has a park-like atmosphere, and people just enjoy having more room to get to know people better.”

That last part — getting to know people better — is something Pastor Hamrick has personally enjoyed.

Now, with a 2,000-seat sanctuary, instead of moving people in and out and adhering to a tight schedule in a tight space, he can issue invitations at the end of teaching times for people to come to Christ, and for people who need prayer. He also leads three services instead of four.

“I like feeling like we can personally minister more. People can linger longer,” he says. “That’s been one of the beauties for me. It’s wonderful to have a facility to accommodate that.”

22 Responses to “GARY HAMRICK & CORNERSTONE CHAPEL: make yourself at home”