Graphic images of violent situations are aired hundreds — if not thousands — of times, as major television stations repeatedly play the stories. Yet, as we begin an inquiry on the topic of violent incidents in churches, it’s important to put the magnitude of the problem in a logical, rational loss management perspective rather than frame it in an emotional, knee-jerk-reaction way.

A reasoned, cautious approach is especially important as your church board and staff reacts to government initiatives, including the 38-page Federal Emergency Management Agency (FEMA) Emergency Operations Plan for Houses of Worship, which was released last summer and is available for download at fema.gov/plan.

If the reaction to all this press (and the 38 pages of “suggestions”) is emotional, there’s a danger of overreaction and misuse of precious church funds. If the reaction is denial, then the health and safety of the flock can be put at risk.
So, it’s important to know: How common are violent incidents in churches?

Severity versus frequency
In this discussion, it’s important to first distinguish between severity and frequency. Violent incidents are so graphic and upsetting that — though statistically infrequent — they tend to have severe psychological impact. Because the press incessantly reports the graphic details of these incidents, with frequent updates over the course of weeks, an academic study would likely reveal that people overestimate their frequency.

Additionally, church security expert Carl Chinn [carlchinn.com] has determined that more than 450 people were killed in deadly force incidents at U.S. faith-based organizations between January 1999 and September 2013. That sounds like a lot — and of course, any death in this fashion is one too many.

But, statistics can be misleading
For example, statistics dictate you’re 12 times more likely to die from a violent attack in a house of worship than from a poisonous snake bite. Every year in America, only five to seven deaths result from snake bites.

However, between 4,000 and 6,000 venomous snakebites occur across the U.S. every year. About 70 percent of them require anti-venom therapy. So, the fact that there are so few deaths as a result is a testament to effective medical care and a high level of awareness about how to avoid being bitten.

The difference is this: While everyone acknowledges the danger of poisonous snakes, some ministry leaders refuse to take even the most basic precautions to prevent or deter a violent incident.

While speaking to reluctant troops preparing for the battle for San Juan Hill, Teddy Roosevelt said, “Do what you can, with what you have, where you are.” The inspiration is consistent with sound risk management principles. Keep it simple — but get started.
Probably the best single step to consider is using off-duty, uniformed police officers to create an official, armed appearance of deterrence. (Upcoming posts on my churchexecutive.com blog, “Risk Management Realities,” will discuss various approaches to developing an emergency operations plan.)

In the meantime, feel free to download my e-book, Legal Realties: Silent Threats to Ministries at no cost. Pay special attention to part three, page 25, appendixes B, C and D. 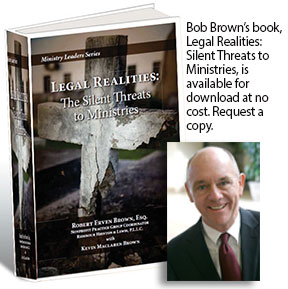 Robert Erven Brown is an attorney licensed to practice in Arizona. He and his nonprofit practice group work with nonprofits and churches, helping them manage key operations connected with their missions, visions and causes.
As permitted by local Rules of Ethics, they collaborate with attorneys who are licensed in states other than Arizona.
He is the author of Legal Realities: Silent Threats to Ministries, which describes his Campus Preservation Planning© initiative — a comprehensive program designed to manage the wide array of risks facing non-profit organizations. Footnotes were omitted.
This publication is designed to provide accurate and authoritative information in regard to the subject matter covered. It is provided with the understanding that the publisher is not engaged in rendering legal, accounting or other professional service. If legal advice or other expert assistance is required, the services of a competent professional person should be sought. “From a Declaration of Principles jointly adopted by a Committee of the American Bar Association and a Committee of Publishers and Associations.” Simply reading this material this does not create an attorney/client relationship with Brown, as this article is general legal information, not legal advice. A formal attorney/client relationship will not be established until a conflict check is completed and an engagement letter has been signed by both the attorney and the client. No “informal” legal advice will be provided by telephone. Simply sending an e-mail to Brown will not create an attorney/client relationship.

Total deadly force incidents (DFIs). According to church security expert Carl Chinn, there were 709 DFIs involving faith-based organizations in the U.S. between January 1999 and September 2013. These included abductions, attacks, suspicious deaths, suicides and deadly force intervention/protection. Of these, 275 resulted in the death of others. Domestic violence, personal conflicts and robbery accounted for about 53 percent of these DFIs.