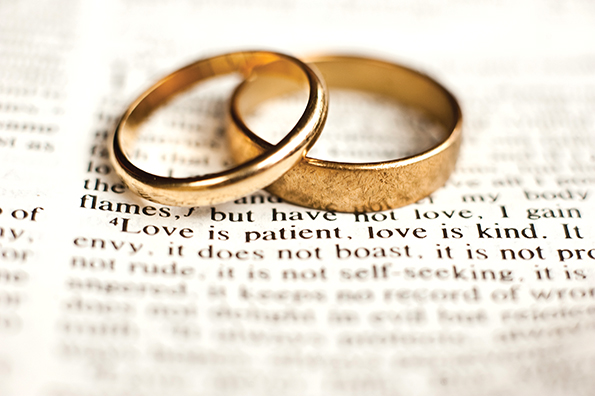 Since the beginning of the United States, marriage has always been subject to detailed rules.

The next major divergence of the two systems occurred June 2015. The United States Supreme Court determined that states could no longer define marriage as one man and one woman because it deprived certain individuals of the incentives created to reward married individuals. The old system violated the equal protection clause in the United States Constitution because it deprived individuals of the marriage incentives unless the marriage was a heterosexual marriage. The Supreme Court decision requires all government agencies to recognize same-sex marriages on the same basis as it has recognized heterosexual marriages. The result is that participants in same-sex marriages must receive the same treatment and benefits as a heterosexual marriage when it comes to the government.

The United States Supreme Court decision did not address the religious aspects of weddings and marriages. The Court left those issues to another day.

What it means for churches

Facilities use. Many churches strive to be center of the community’s activities. They take pride that they host a wide variety of groups in their facilities. In some communities, the church has the largest gathering space in the entire community.

Some states and local governments have passed a law that prevents unlawful discrimination by facilities that are open to the public. Some of these laws include sexual orientation, sexual perception and gender identity as classes of individuals protected from discrimination. These statutes are used against Christian business owners who refuse their services to same-sex weddings.

Most churches are subject to Title VII, except churches may discriminate on the basis of religion. Further, ministerial employees are not subject to any of the federal employment laws. For non-ministerial employees, nothing in Title VII allows the church to discriminate on the basis of sexual orientation, sexual perception, gender identity or same-sex marriage in its employment practices. The church may not ask an applicant about his or her sexual orientation, gender identity or marital status.

• Establish the church’s position through a statement of faith that addresses sexual orientation, sexual perception and same-sex marriage.

• Establish that the church consistently adheres to its statement of faith. This means that the church does not place in leadership individuals who have a homosexual orientation, transgender individuals, and parties to same-sex marriages.

• Establish that the church consistently refuses to allow its facilities to be used for any purposes that violate statement of faith.

• Establish that the church consistently refuses to allow its ministers to participate in or conduct wedding ceremonies that violate statement of faith.

• Require all job applicants to agree with the statement of faith before they can submit an application.

• Require all non-ministerial employees to a re-affirm their agreement with the statement of faith annually.

Helpful language for addressing the issue

Statement on Marriage and Sexuality
(for Bylaws and Statement of Faith)

We believe that God has ordained marriage and defined it as the covenant relationship between a man and a woman, and therefore we will only recognize marriage is between one biological man and one biological woman. Genesis 1:27-28, Genesis 2:18-24, Matthew 19:4-9, Mark 10:5-9, Ephesians 5:31-33.

By signing the church membership covenant, I am signifying that I agree with the Statement of Faith, including the Statement on Marriage and Sexuality.

By submitting this application, I am representing to the Church that I agree with the church’s Statement of Faith and Statement on Marriage and Sexuality. I am also representing to the Church that my lifestyle on a 24 -hour and seven-day-week basis will be consistent with both those statements. If at any time my lifestyle fails to live up to those requirements, I understand that I can be disciplined, including termination of employment.

Addition to Code of Conduct for Employees

As an employee of the Church, I acknowledge that the church bases its teachings and guidelines for living and working on the Bible. The church expects each employee’s conduct will be in line with the moral spiritual and ethical teachings of the church as well as its Statement of Faith and Statement on Marriage and Sexuality on a 24-hour and 7-day basis. If the employee’s conduct is inconsistent with the standards, the church may discipline the employee in any way, up to and including termination of employment.

Frank Sommerville, JD, CPA, is a shareholder in the law firm of Weycer, Kaplan, Pulaski & Zuber, P.C. in Houston and Dallas. He is a nonprofit attorney and CPA who regularly assists churches in preventing litigation.