At Prestonwood Baptist Church in Plano, TX (above right),  children’s check-in technology isn’t a new concept. In fact before approaching Robert Fredella, CEO of Fort Worth, TX-based SUNPRO Custom Creations, the church already had more than a dozen of the company’s (aptly named) Prestonwood models up and running.

“But, they were building a new children’s wing and wanted to put in kiosk s which took up a smaller footprint, yet offered style, media and could accommodate increased traffic flow,” Fredella says. “The goal was to 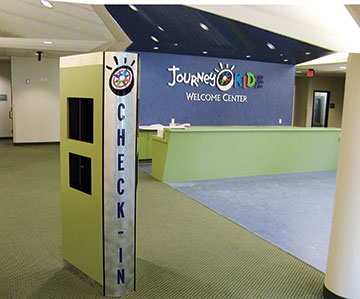 have fewer physical units, but that still accommodated a robust children’s check-in.”

The church ultimately decided to install “Ruje” kiosks, in large part due to their double-sided design which lets two families to check in simultaneously. “Also, I’m sure, because it was less expensive than [to install these] than two of our single-sided models,” Fredella says.

Additionally, because Prestonwood chose a lime-green motif for its new children’s wing, the thousands of laminate color choices available for both the body and trim of the unit were a plus.

For added security, each kiosk also was designed with a large, lockable storage area in the back. All can be made portable with the addition of wheels and handles.

Although compatibility with Fellowship Technologies church management software comes standard, the kiosks can be interfaced with any package.

“We’re currently working with a church who wants the Ruje manufactured to be ADA-compliant,” Fredella adds. “It will have the same footprint, but with ADA access to the touchscreen and the label printer.”