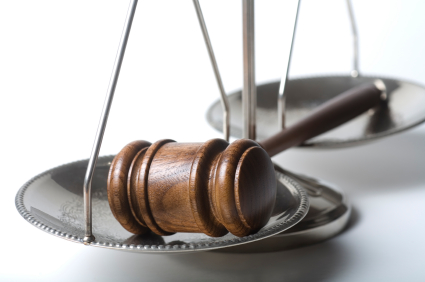 The public perception of churches has hit a downward spiral as America becomes more and more “litigation-go-lucky.” The benevolence of your church’s ministry may be overshadowed by attacks on your campus’s assets.

For example, in reaction to a recent multi-million dollar church judgment in Arizona, a blogger recently commented:

“You cannot tell me that a church like that gives out as much as it takes in […] Sell the building and the land it’s on. Let them attach their assets!”

This two-minute video explains why this situation might be relevant to your own church or ministry.

Despite the fact that charitable immunity was abolished in Arizona in 1952, local churches were rarely involved in lawsuits in the 1950’s, 1960’s or even 1970’s. For that matter, there simply were fewer lawsuits in general — at least, compared with today.

My anecdotal conclusions are well borne out by the annual studies of both national and Arizona verdicts. The author of the annual review of Arizona jury verdicts, Kelly MacHenry, noted in June 2011 that: “Verdicts are a reflection of their times… Verdicts today surely seem different (larger in size yet perhaps fewer in number than they were 20 years ago).”

The average overall size of the top 10 jury verdicts in the United States increased by $27 million, from $157 million in 2010 to $184 million in 2011. Fast-forward to 2012, when a fundamental and dramatic paradigm shift changed the sociological landscape since those simpler days.

As I look back over nearly four decades of legal practice, I can’t help but marvel at the changes I’ve observed during my lifetime, and the attitudes — especially of jurors — toward litigation and toward the church.

A large part of the legal work which we do at the nonprofit practice group at Ridenour Hienton & Lewis focuses on the impact of these fundamental changes on churches and parachurch ministries in the United States today.

The assumption that a ministry cannot, and will not, be sued by its own employees and members is, candidly, both naïve and unrealistic. This assumption can also be fatal to the existence of a charitable organization.

According to one senior analyst at a seminar for the National Association Churches Business Administration, well over 50 percent of the claims against churches are made by their own members and employees. For example, the $5.9-million judgment against Central Christian Church of Mesa, AZ, in the fall of 2011 was obtained by a longtime church member.

In an article titled “Lawsuits in the Church,” first published in the April 1995 issue of New Horizons (a publication of the Orthodox Presbyterian Church Denomination), Ken Sande, President of Peacemaker Ministries, wrote:

By all accounts, America has become the most litigious society on the face of the earth. In the last decade, civil caseloads have increased by 33 percent, which is five times faster than the increase in our population. As a result, new case filings in state courts now exceed 100 million per year. This amounts to one court case for every two adults in the United States!

Nearly 20 years later, most commentators agree that the situation has not improved. Sande commented (and I agree) that our ministries are not teaching people how to respond to conflict in a Godly manner. As Chief Justice Warren Burger observed, one reason our courts have become overburdened is that Americans are increasingly turning to the courts for relief from a range of personal distresses and anxieties. Remedies for personal wrongs that once were considered the responsibilities of institutions other than the courts are now boldly asserted as legal “entitlements.” The courts have been expected to fill the void created by the decline of church, family, and neighborhood unity.

In 2003, Newsweek magazine’s December 15 edition contained the cover story, “Lawsuit Hell: How Fear of Litigation is Paralyzing Our Professions.” The cover contained photographs of a minister, a doctor and a police officer. As evidence of the public’s proclivity to litigation, this article contained a reference to a convicted sex offender who was being hunted on felony charges for three days after he disappeared into the snowy woods near Penobscot County, ME.

When the suspect was finally tracked down, the man threatened to sue the police for not catching him sooner. Apparently, the man was upset because he had suffered frostbite and lost two toes during his escape attempt. The County Sheriff noted that the sex offender couldn’t find a lawyer to take his case, but his proclivity to sue did not surprise the County Sheriff, Glen Ross, who noted: “We’re always facing lawsuits. It’s on our minds all the time.” 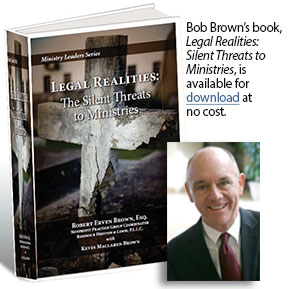 Robert Erven Brown is an attorney licensed to practice in Arizona. He and his nonprofit practice group work with nonprofits and churches helping them manage key operations connected with their missions, visions and causes. As permitted by local Rules of Ethics, they collaborate with attorneys who are licensed in states other than Arizona. Brown is author of Legal Realities: Silent Threats to Ministries,  which describes his Campus Preservation Planning© initiative — a comprehensive program designed to manage the wide array of risks facing non-profit organizations. He can be reached by email or by calling 602.744.5748.

Campus Preservation Planning© used with permission.
Copyright 2000-2013 by Robert Erven Brown, p.a.
All rights reserved.
This publication is designed to provide accurate and authoritative information in regard to the subject matter covered but viewing this does not create an attorney/client relationship with Mr. Brown and is only legal information, not legal advice.  A formal attorney client relationship will not be established until a conflict check is completed and an engagement letter has been signed by both the attorney and the client. No “informal” legal advice will be provided by telephone. Simply sending an e-mail to Mr. Brown will not create an attorney-client relationship.

One Response to “Risk Management Realities: Times are a-changin’!”