In 1975, a group of young renegades in the Chicago suburbs decided to “do” church a new way. Starting in a local theatre, they brought a fresh approach to living out their faith in Christ. With 100 in attendance and a children’s ministry that met in one of the washrooms, no one could have imagined what God would do with these impassioned young adults.

Within 31 years, the suburban megachurch church had opened its fifth regional campus at another theatre – the historic Auditorium Theatre in the heart of Chicago. And in the fall of 2011, with more than 1,000 in attendance each week, Chicago’s regional campus had expanded, adding a ministry center for offices, meeting space and special events.

Now with six regional campuses in Chicago, including Casa de Luz for the Spanish-speaking community, Willow Creek experiences most of its growth from these smaller regional sites. Along the way, Willow has learned a lot.

When does a chur 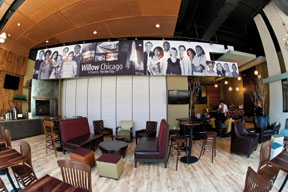 “We began discussing a regional strategy in 1995,” says Greg Hawkins, Willow’s executive pastor. “We learned one-third of the congregation drove more than 30 minutes to attend church.” People who drive long distances were less involved in the life of the church. When they invited friends to church, they were turned down. Drive an hour to go to church? No thanks. “Our mission – to turn irreligious people into fully devoted followers of Christ – needs strong participation and a commitment to relational evangelism,” says Hawkins. “Our mission was being compromised by geography.”

How is Willow’s strategy for regional sites unique?

Regional sites offer a full scope of ministry to people at all stages of life. “When the leadership of a campus has their own expression of worship, small groups, Promiseland (children’s ministry), and student ministry, they own the outcome,” says Hawkins. “All the campuses operate under the same policy governance and elder board, but they survive because they have worked to establish their own identities based on their unique demographics.”

“There is no one model for a campus,” says Steve Gillen, regional pastor of Willow’s church on Chicago’s North Side. “Each community is different and there is no one-size-fits-all. What works in a suburban area composed primarily of young families won’t necessarily translate to an urban area.”

Jon Klinepeter at Chicago’s downtown campus agrees. “In our urban environment, people have different attitudes, mindsets and a different pace of life. Because we’re in the center of the city, we have a greater diversity of people, backgrounds, ethnicity and a wider socio-economic band. That influences what we look like and how we spend our time and energy. The values are not much different, but how they play out is.”

What does it take to launch a successful regional site?

“Launching a campus takes optimal horsepower,” says Marcus Bieschke, the campus pastor of Willow’s Crystal Lake church, which recently birthed a new campus. “It starts with a strong healthy birthing campus, with a deep leadership bench that won’t leave a vacuum. Naturally it takes sufficient capital and a strong infrastructure, but senior leaders must have a God-led hunger to reach the people in the new demographic.”

A successful site starts with a permanent campus pastor who is in place from the start, a committed core of people and the right location.

What has Willow learned from launching multisite campuses?

“We set an initial goal to launch a new site once a year,” says Hawkins. Several years into it, Willow slowed down the process. “Knowing that a good campus pastor with strong leadership skills and a critical mass of Willow DNA is essential to the success of a new campus, we discovered the key limiting factor wasn’t money or facilities, it was finding the right leader.”

From the start, a regional site needs a permanent (and fantastic) campus pastor. “It’s nearly impossible for an interim leader to cast vision for the future,” says Bieschke. “Campus pastors need to be senior pastor material with strong leadership and teaching gifts.”

Campus pastors unplug from the central campus to teach at their sites approximately eight times each year. “All of us also teach at support workshops and classes, so overall, it amounts to a dozen or more times each year,” says Bieschke. This can translate into a recruiting challenge since most senior pastors want to teach more than eight times per year.

Timing is also critical. “It takes a core of approximately 500 to open a new campus and in most cases, those people come from the birthing campus,” says Hawkins.  “It’s important they be replaced because their departure is felt on multiple levels, including the energy in the room.”

What are the challenges and advantages of a multisite church?

Advantages: “We’re free to lead. Just lead,” says Bieschke. “We get direct coaching from Senior Pastor Bill Hybels, a man who has advised presidents and who Jack Welch said should be president. That’s invaluable.”

Disadvantages: A campus site has to do more ministry with fewer resources. “The sagging economy is a transcendent reality for any church, especially a multisite location,” says Bieschke.

What does it take to lead a multisite?

“A campus pastor needs a kaleidoscopic variety of skills – from team building and strategic planning to experimentation and development,” says Bieschke. “It takes acrobatic flexibility. An adaptability gene that someone either has or doesn’t.”

With more than 24,000 in attendance each weekend (including all the campuses), Promiseland children’s ministry no longer meets in washrooms, but with Chicago’s regional site, theaters are still a part of Willow Creek’s DNA.

Who is a successful campus pastor?