How you can find opportunities to influence and engage culture in a way that is relevant and impactful for today’s society.

I was in a local coffee shop enjoying a cup of dark roast while reading a copy of Cormac McCarthy’s The Road. A man sitting next to me inquired about the book, curious after hearing so many individuals talk about it. What was it about?, he wanted to know. Was McCarthy as captivating as they say? As dark and imposing?

I put the novel down and set to sharing the story so many have gravitated toward, leading my new friend through the post-apocalyptic narrative of a father and son caught in the midst of the greatest environmental disaster known to mankind. When I finished, his response was instinctive: Tell me more.

Without any intention of my own, McCarthy’s novel opened up an avenue of communication to share the wake-up call of the Gospel with a complete stranger. By engaging in modern-day culture, I had a new means to relate to and foster a relationship with others. The man and I continued our conversation and coffee drinking while talking about the future of the world and McCarthy’s cautionary tale that shakes individuals awake in their life, begging them to think about the world God has created for humanity and what we’re doing with it.

To me, this is a small incident in a beautiful epidemic where Christian principles are being taught through cultural engagement. There is opportunity to witness where there is opportunity to connect. Think about it. Throughout history, God has used modern means to illustrate an eternal message. All people and all situations have been, and can be used as, vehicles for Gospel distribution and reception. Culture – including movies, TV and books – are no exception.

As a teaching pastor of Yorba Linda Friends Church, a megachurch in Southern California, I have lived a great deal of my life in Hollywood’s shadow. But instead of being threatened by the entertainment industry’s powerful impact on culture, I’ve found it to be a tremendous asset.

Let’s be honest. If you’re looking for a way to get the truth out, you’d be hard pressed to find a more vocal witness with a bigger audience than the silver screen.

Realizing the power of culture, I’ve spent the past few years seriously digging my heels into what it means to be a modern-day Gospel bearer. A few years ago, I began leading a bible study in Studio City comprised of young, Hollywood actors. At the same time, I worked with two close business partners and formed Twelve Gates Productions — a cutting edge entertainment company dedicated to producing a full line of graphic novels, feature films and video games.

Thanks to these endeavors, among others, I came into a partnership with the Weinstein Company where I wrote a movie discussion guide and a four-sermon series built around Cormac McCarthy’s Pulitzer Price winning novel The Road — a book the Weinsteins adapted to film and released starring Viggo Mortenson, Charlize Theron and Robert Duvall. Inevitably, the sermon series was paired with the movie and screened to media, film societies, and faith-based communities in 10 major U.S. markets.

In my opinion, the most interesting questions asked at these screenings undoubtedly came from church leaders who wanted to know how they could use The Road and other films in their local church. It was exactly the response I was hoping for.

Church leaders around the country were tapping into what I understood to be true: Cultural trends were creative carriers of the Word. The question wasn’t if we should use it, but how. 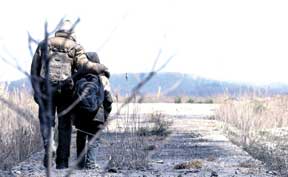 My experience with The Road, in the big sense, brought me to a partnership with the Weinstein Company. But just as importantly, it brought to a conversation with a stranger over coffee. Put simply, what started as a book and a movie resulted in a chance to tell someone about Jesus.

My encouragement to church leaders and Christ followers is to consider how you can find similar opportunities to influence and engage culture in a way that is relevant and impactful for today’s society. Chances are it won’t be easy – in fact, you may find that it is the most challenging thing you will ever do – but it is an opportunity to spread the Gospel that cannot be missed.

Your vision will certainly be unique, your resources will be different, but God’s ability to inspire a generation to change the world remains true. Ask God to open your eyes to the possibilities. There are certainly avid witnesses to be found in our modern-day world if we but seek them and seize the opportunities.

ALIGNING THE CHURCH AND THE CULTURE

One of the most unique ways to experience the cultural trend is to be a part of it. Produce a documentary or a feature film. Write a book. Host an art show. Whatever your church decides, get hooked on creativity. Let me give you an example. At Yorba Linda, we became involved with a movement to free the Dalit people of India, a group comprised of more than 250 million people who daily experience the longest running social injustice in the world.

We initially went to India to build schools for the Dalit children, but upon coming home we were so moved that we wanted to take the story to a broader audience. Under the direction of Matthew Cork, our lead pastor, Brent Martz, our pastor of creative ministries, and Jon Van Dyke, our media director, we created a documentary called Deletes that could serve as an engaging educational tool.

The documentary was screened at several film festivals and, thanks to its success, a feature film called Not Today (see storyboard above) is currently in the works. It will be shot on location in India later this year.  — P.H.

Photos from The Road are taken from Phil Hotsenpiller’s discussion guide.