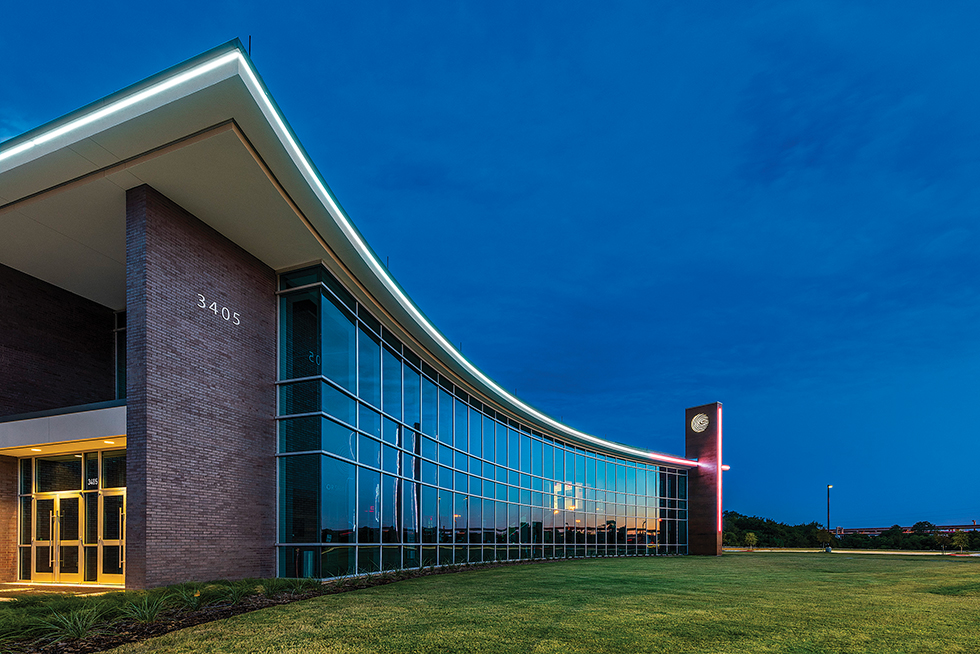 Ryan Binkley had a God-given dream — several, in fact — about a church where people can “find and fulfill their created purpose in Christ.” This would be a place where those without a church home, can not only discover one, but come into the understanding of their destiny in Christ.

His path to building that church was winding (and often converging), but the result is a facility whose welcoming design beautifully reflects its purpose.

Senior Pastor Ryan Binkley’s career began with a passion for business. After graduating with a business degree, he went to work for a few different household-name corporations.

A few years later, he rededicated his life to the Lord. Although Ryan still worked in the corporate world, he felt the call to full-time ministry after a mission trip to Guatemala in 1995. “My whole world turned upside down during this trip,” he recalled. “I knew the Lord was speaking to me: Lay this down. Lay down business.”

A couple of years later, Ryan married his best friend, Ellie, at Victory World Church in Atlanta, and they both began working as directors of a young adult ministry school. They led inner-city ministry, mission work and school assemblies. Their plan was to eventually do church planting and missions based out of their church for the foreseeable future.

But tragedy challenged these best-laid plans when Ryan’s older brother, Hal, was killed by a drunk driver back home in Dallas. Hal ran a business with their father. Ryan and Ellie prayed about whether they should relocate to be with family and help fortify the business.

“We were reluctant because we really felt a call to what we thought a ministry calling would be,” he said.

As they prayed and sought the Lord for direction, Ryan received a dream from the Lord that would give greater clarity to his purpose and destiny. In the dream, he saw a businessman in heaven who was serving his employees and helping to put food on their families’ tables. The Lord showed Ryan that the calling of a businessman was equally as honorable as that of a pastor.

“The important word was that I needed to honor both callings,” Ryan recalled. “And he was very specific with me. The Lord said, ‘Ryan, this is part of your inheritance; if you don’t honor it, I’ll take it from you and give it to somebody else.’”

After moving to Dallas, the Binkleys took a year off from ministry to focus on the family business as they journeyed through the pain of losing their brother. Soon, both Ryan and his father began receiving ideas for a new company. As God continued to speak to Ryan through dreams, in one dream, he saw himself building a great company, as well as planting a church one day. “But I didn’t think too much about it because I knew our company wasn’t ‘great’ yet,” he said.

In 2005, they sold their business and started a new one: Generational Group, a Merger and Acquisition, Consulting, and Wealth Management Group. Today, it has 230 employees and 12 offices throughout the United States and Canada.

During this time, as Generational Group continued to grow, Ryan and Ellie faithfully served in the young adult ministry of their local church in Dallas. Eventually, they were ordained as pastors, although they were bivocational — a first for their church. In 2013, they were sent out to plant Create Church in Richardson, Texas.

Today, Ryan is living out the dream that God gave him many years ago of being both a senior pastor and the president and CEO of a growing company.

A foundation to build on

Just as visions had shaped Ryan’s career thus far, they were also instrumental in how Create Church got built.

One dream showed him above one of the main highway corridors in the city of Richardson. He saw a resurgence of business and corporations along Central Expressway, following decades of economic depression in the area.

A trip to the City of Richardson confirmed this: Ryan was shown plans for citywide improvements. Additionally, State Farm was planning a multibillion-dollar corporate office and living community there.

A land grab ensued — but Create Church was in no position to jump into the fray. At the time, it was meeting on Sunday mornings in an event center. A completely mobile operation, two trailers of sound equipment and children’s ministry supplies were brought in every week. This was the format for nearly six years as the church grew and saved money for a permanent home.

Then, an unbelievable opportunity arose: several acres of land along Central Expressway became available. A beautiful piece of land, several of its 20 acres run alongside Spring Creek, a broad waterway that runs through the heart of Dallas.

“It was a miracle, because there was no more land!” Ryan recalled. “This particular acreage was actually under contract for about two years with a few other developers, and it fell through. Basically, they let us be the third backup offer on it.”

Another offer was accepted, but then delayed. Then the foundation that owned the land opened it back up for purchase. “They said, ‘The first one to get an escrow check in here gets the land,’” Ryan said. “We did that. Within two hours, we were on our way to owning this incredible piece of property.”

The purchase took all of the church’s saved cash at the time, but Ryan and his board knew that God was leading them this way.

“It’s a really amazing piece of property,” he said. “We’re very grateful, more than anything.”

Importantly, the land’s high-visibility location also makes it an ideal place to build a church that can, as intended, invite the community in with its design.

The church spent the next two years saving money, in preparation to start building.

A gateway to Richardson

With so much at stake — but a wealth of opportunity, too — Ryan selected Dallas-based HH Architects to design the church. “It was just a great connection from the start,” he said. “Their design process, experience and team were the right fit, and they gave us confidence we would get the highest-quality building within our budget.”

Nearly 100 rain delays over the next few months pushed back project timing, but even that proved prophetic. For one thing, it moved the church’s opening to the fall — a resurgence time when people are returning to schools and church. Additionally, “move-in day” occurred on the very same weekend that the church was required to vacate the event center due to bankruptcy of the event center.

From the start, the facility has done everything it was designed to do for ministry. As Bruce Woody, president & CEO of HH Architects, explained, the new church acts (by design) as a gateway to the city of Richardson, given its location on an axis of two major interstates.

The initial phase is two simple building structures linked by a commons area with an intentionally designed, 30-foot-high curved glass wall that draws the eye to the focal point of the first phase of the campus.

“The facade is designed to create an ever-evolving visual experience as you approach the site from various angles,” Bruce pointed out. This is further enhanced at night with the backlit commons area which is accented with exterior LED lighting that leads the eye to a cross.

From inside the expansive and airy lobby, churchgoers can watch the cars go by, bringing the community inside. Several sitting areas offer just the right spaces to share fellowship or a cup of coffee, or just to visit before and after services. All week long, people can come and plug in their laptops, iPads or iPhones and get some work done in a peaceful, quiet setting.

About 850 people showed up for the first worship service in Create Church’s new facility — at least a few hundred new faces. And just as intended, many of those faces belonged to the more than 220,000 people who drive by the church every day.

“Since then, we have had so many visitors come and say that they watched the building get built and always wanted to visit someday,” Ryan said. “The design and architecture that HH Architects brought to life in our church has intrigued and welcomed many people to have a beautiful place to worship and make them feel right at home.”

Bringing the outside in

Worship happens inside a uniquely designed 550-seat sanctuary. HH Architects’ team was intentional about natural light being part of the worship experience, so they incorporated large windows on each side of the sanctuary. For filming or other events, when ambient light is a problem, shades installed on each window can create either a partial-light or full-blackout effect. This has the added effect of being able to set just the right atmosphere for weddings, banquets and other gatherings.

Of course, with all this glass, heating and cooling costs in the space had to be (and were) kept in check.

To this end, as Bruce pointed out, the front facade faces east, taking advantage of natural morning light into the large gathering space. “This provides a welcoming sense of transparency to passersby,” he explained. “We created the same experience as part of the sanctuary design, providing an invitation to the community.”

The design also features several offices and education spaces. These, too, feature plenty of natural light and views to the large wooded creek.

Thanks to HH Architects’ master planning, the first phase was completed with the second phase in mind. As such, the church can confidently expand when the time comes.

This will likely include a larger sanctuary.

And given the land’s beauty, expanse, and creek access, outdoor ministry spaces might also become a priority. Ryan said he envisions a courtyard with fire pits and grill-out areas — possibly even an outdoor amphitheater or recreational ball fields.

For Bruce’s part, he envisions the campus naturally moving down the hill towards the creek, integrating outdoor gathering and fellowship areas, building community engagement with a natural park setting, and leveraging existing City jogging trails which cut through the middle of the site.

When the church is ready to take those next steps, Ryan said, he hopes to enlist the HH Architects team again.

“It’s all ministry to me”

Across the street from Create Church’s stunning new facility, is another brand-new building. It houses Generational Group, Ryan’s company — a visual representation of the duality he navigates every day as a businessman and pastor.

Currently, Ryan splits his time about 50/50 between the buildings. He spends a few days a week at the business, a few days at the church, and the rest of his time preparing and praying for messages.

If it seems like an unlikely pairing, Ryan, for his part, believes businesspeople like him are increasingly being called into ministry and serving both roles.

“It’s the modern day ‘king and priest calling,’” he said. “Some people ask me when I’m going to give up the business, but it’s all ministry to me. God’s always doing new things for the furtherance of the Kingdom of heaven. We just have to come into alignment with what He is speaking and step into it.”