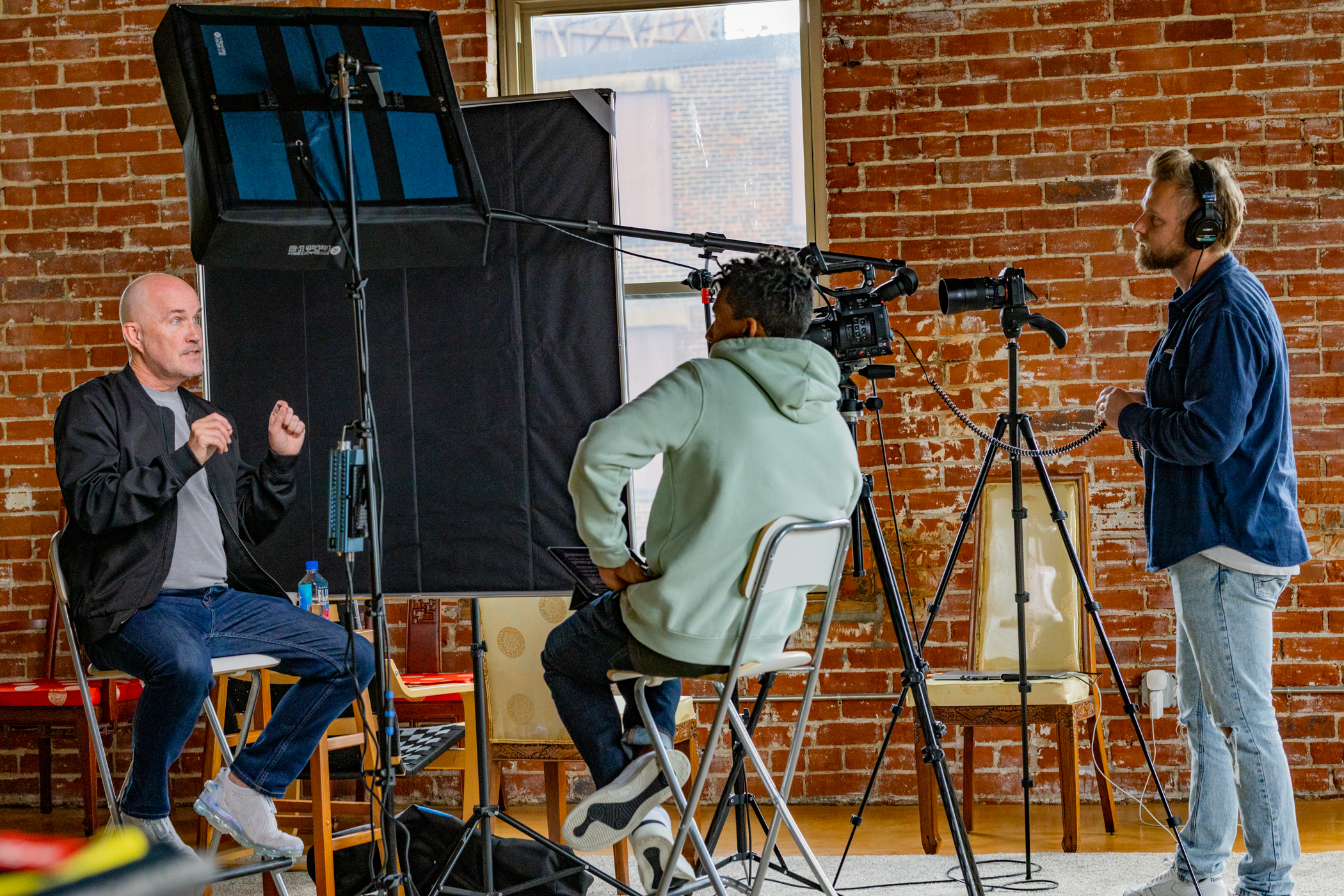 For the creators of Summit TV, their stories are beacons — for pastors and church members alike — that signal, I’ve been there, too.

A visit to the Summit Integrated Systems website uncovers a wealth of church audio, video and lighting products and expertise. As a leader in this space, that’s expected.

If you look closer, though, you’ll also find a true passion project — one that helps pastors start the toughest, but often most necessary, conversations in their churches.

The Racially Disconnected Church dares to confront racism in the American church.

Death By a Thousand Lies details a successful TV preacher’s descent into the sexual underbelly of America during his rise to fame.

Leading a Generation chronicles a pastor’s challenging trajectory from an abusive childhood to the founding pastor of a 10,000-member church.

These are just a few of the beautifully shot, highly engaging stories produced by Summit TV, a dream realized by Nick Kofahl, co-owner and Chief Vision Officer of Summit Integrated Systems. Driving home such impact takes courage; every story demonstrates a commitment to being unafraid of “going there,” regardless of topic.

“[Kofahl] wanted to tell stories and bring up topics that our team was hearing from pastors as we worked with churches throughout the country,” explains Max Williams, Director of Marketing and Communications at Summit Integrated Systems. “His heart was to not only encourage leaders by letting them know they were not alone, but also, as he would say, ‘be a burr in the saddle of American church culture.’”

Williams plays an integral role in this vision; back in 2018, when he joined the Summit Integrated Systems team, Kofahl asked him to assemble a team that could bring it to life. The mission, in short, was to address the topics that haven’t been talked about enough (if at all) in the Church.

“The interesting thing about Summit TV is that it doesn’t have anything to do with audio, video, lighting, or acoustics, which is what we’re known for,” Williams shares. “However, it puts the heart, vision, and values of our culture on display in a way that is difficult for a company like us to otherwise communicate.”

As Kofahl knew, Williams was an ideal choice to lead the charge.

His career began in 1998 as a worship leader. He then became a recording artist and, in 2006, helped plant a church in St. Louis. As Williams matured in his calling, he became a creative pastor and developed a passion to coach artists. After continuing to lead worship and helping to plant two more churches in Los Angeles, he was asked to join the team at Summit Integrated Systems.

Given Williams’ ministry background, moving into the integration space might seem like a leap. Yet, he says it actually doesn’t feel like he is working in a different space at all.

“Like the rest of our team, it’s not the gear or technology that wakes us up in the morning or brings fulfillment,” he explains. “It’s getting the opportunity to serve local churches all over America.”

A peek into the process

All Summit TV content is produced for church leaders and their communities. Amazingly, a team of only three people produces each story. It starts with Zoom interviews, followed by creative meetings with the team, and then a half-day of shooting the interview.

“Because we never have a lot of time, [we] have to go in having done as much research as possible,” Williams explains. “After editing is final, the process normally takes about two months to complete from start to finish.”

While production might be super streamlined, spend some time with one of their compelling stories and the impact is anything but small-scale. The team’s intent for the content is clear and effective: to, as Williams says, “start conversations and allow the local church to be a part of presenting answers.”

To this end, many pastors find unique value in the stories’ ability to initiate important small group discussions or even to play during a service to support a message.

Subjects for Summit TV stories emerge organically as the team travels and partners with churches to design AVL systems. Ideas are gathered and presented in creative team meetings. A follow-up with a discovery interview is then scheduled.

“And if we think there’s a story be told, we dive in,” Williams says.

“[T]here couldn’t be a more important story to tell”

This is how the latest, highly powerful story came to be: In Plain Sight, an intimate, at times heart-wrenching, look at the work of husband-and-wife sexual abuse law experts Kimberlee Norris and Gregory Love.*

Though it’s an uncomfortable topic, the end goal of this story is to educate the Church on the root of the issue of child sexual abuse, and how to prevent it as much as possible moving forward.

It began when Williams and Love met at the 2020 Church Multiplication Conference in Houston and quickly became interested in what the other had to offer.

“The technical gear Summit had on display got my attention right away — it was excellent,” Love recalls. “Having just built a studio, I regretted not having met them earlier.” As he asked Williams more questions, Love says it became clear that the Summit team were not classic salespeople; they were each high-caliber experts in lighting, audio, video — but they were also “interesting humans that were interested in me and others.”

For Williams’ part, he says: “As I began to listen to [Love] talk about MinistrySafe, I couldn’t help but to think of how we could help get the word out about the training that they offer churches.”

To learn such a resource existed was news to Williams, personally.  “And for me, there couldn’t be a more important story to tell,” he says.

Love and Norris’s shared story begins in the ‘90s, when they met while defending a worker who was fired for reporting abuse at a children’s home, as well as numerous children who were abused there.

After those cases had a favorable outcome for the victims, Love and Norris’s home church asked for help in obtaining resources to prevent child sexual abuse — but try as they might, they couldn’t find anyone with this expertise.

“What I didn’t know was that God was saying, ‘No, no, no, I want you to do it,’” Love recalls. “You two — I’ve equipped you two [with the] background, education, experience. You do it.”

In 1997, Love and Norris started MinistrySafe, offering training, policies, screening protocols and other resources to help the Church better understand not only how child sexual abuse might come about, but how houses of worship can unintentionally create an environment where abuse can happen more easily than elsewhere.

As evidenced in In Plain Sight, they contend that a big part of preventing child sexual abuse in the Church is understanding that the issue affects every congregation, whether a church body knows it or not.

“It is inevitable,” Norris says. “It’s just a statistical probability.”

As Love explains, this is because — even in the absence of known allegations at the church itself — every person in the congregation has likely either been abused themselves, is married to someone who has been abused, or has a child or friend who has endured abuse. Alarmingly, research shows 1 in 5 children will be sexually abused by age 18.

“You have to talk about it before you can change anything,” he adds. “This is a topic that is going to be received, because it’s being experienced.”

Norris emphatically agrees: “If there were any other subject matter that was impacting one-hundred percent of every congregation in such a prolific manner, it would be addressed repeatedly from the pulpit.”

But acknowledging the problem is one thing — what does it look like to address it?

For starters, it requires dispelling common misconceptions about child sexual abuse. For instance, as Norris points out, many people (especially in a trusted environment like the church) are afraid to falsely accuse someone of sexual abuse.

“But false allegations are rare,” she points out. “They’re less than five percent of the whole.”

Another misconception is that the danger is “outside the fence.” As Love explains, this highlights the importance of distinguishing between the abduction offender, or “stranger danger” — which represents only a small fraction of all abuse instances — and the preferential offender, which represents more than 90 percent.

Even so, very few churches’ abuse-prevention efforts are targeted at the preferential offender.

“What every preferential offender needs is trusted time alone with your kid,” Norris says. “And the only way you’re going to give [that] is if you believe this person is trustworthy.

“Our society does not protect well against the preferential offender.”

Fortunately, as Love points out, once church leaders understand the information surrounding the
risk — including being able to identify the preferential offender’s grooming process —  they can build the right fence. And that’s MinistrySafe’s mission.

In the end, the story behind In Plain Sight changed a few times before it was final.

The original intent was to tell Love & Norris’s story — how and why they do sexual abuse work. Before long, it became evident that the issue was much bigger; the problem within the Church was much deeper; the challenges to change were higher.

“The ways we were speaking into the challenges covered the waterfront,” Love explains. “They got a taste of the heartbreak we have experienced representing victims and sharing their heartbreak, which created the motivation to step into the problem: though we desire to do so, we cannot help all of the victims — but we can labor to ensure that children are no longer victimized, especially in our churches.”

In spite of these shifts — indeed, maybe because of them — Williams says this type of swayed progression is common and that he couldn’t be happier with the outcome.

“We allow stories to evolve,” he explains. “Sometimes we go in with expectations of capturing something specific and end up getting something that’s different.

“Our hope in the end is to always serve the story as best as we can,” he adds.

In doing so, Summit TV aims, above all, to help pastors and church leaders tackle tough topics with their church families. In the next few years, one of the difficult topics it addresses might be mental health in the Church. Williams and his team would also like to shoot interviews with influential church leaders.

So far, the effect of Summit TV is powerful.

“We hear stories … all the time, thanking us for putting our hearts on display and not being afraid to have tough conversations,” Williams says. “My hope is that I’m able to impact, influence and inspire creativity in the leaders of those churches. And in turn, they will inspire many in communities all over America.””

*Love & Norris are also guest editors for Church Executive and authors of the popular, long-running “Stop Child Sexual Abuse” Series in the publication.